Dublin is the capital city of Ireland, located on the east coast of the island. With an urban area population of about 1.2 million it is the largest city of the country. Dublin offers a wide range of sites and activities all year round, and is known in particular for its nightlife. As the centre of Dublin is relatively small, all sites can be reached easily by foot.

The River Liffey divides the city in two parts. On the north side of the Liffey you will find some shopping streets and the General Post Office, one of Ireland’s most iconic buildings. Whereas on the south side you will discover the main attractions of Dublin. Starting point is usually the Temple Bar area, with its many pubs, nightclubs, restaurants and galleries. On the weekends there are also different kinds of open-air markets. I highlight recommend as well to stroll through the Drury Street, which is situated nearby Temple Bar. It is one of the trendiest areas of the city, offering mainly design shops, fashion boutiques and good restaurants.

The Trinity College is a must-see attraction in the city centre of Dublin. It is a research university founded in 1592 by Queen Elizabeth I, modelled after the collegiate universities of Oxford and Cambridge in England. Trinity College is widely considered the most prestigious university in Ireland and amongst the most elite in Europe. I particularly liked the remarkable architecture of the different buildings.

A beautiful place to take a break from sightseeing is the historical St.Stephen’s Green Park. The Victorian public park is the largest one in the city centre and offers many tree-lined pathways, colorful flowerbeds and a pond full of swans and seagulls. North of the St.Stephen’s Green Park you can visit the The Little Museum of Dublin, located in an 18th century Georgian town house. The museum chronicles the history of the city in the 20th century with a collection of over 5’000 artifacts.

Some artifacts inside the Little Museum of Dublin 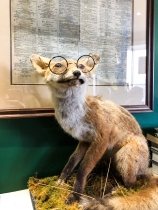 An artifact inside the Little Museum of Dublin 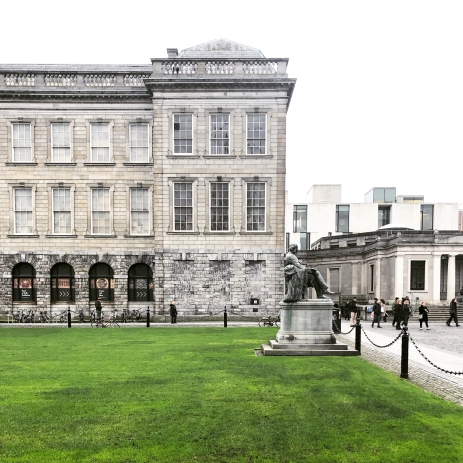 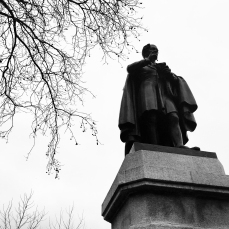 Statue in the city centre

A street art work in the city centre of Dublin

During my short stay in Dublin I also visited two beautiful medieval churches, both of them located near each other. The Christ Church Cathedral is the oldest building in Dublin, dating back to the 11th century. Its restored 12th century crypt is one of the largest in the UK. The St.Patrick’s Cathedral with its beautiful surrounded park is the largest church in Ireland and was founded in 1191. The cathedral is world famous for its choir.

I also highlighy recommend to do a short stroll through the Dublin Docklands. The area is known as the modern business hub of Dublin’s International Financial Services Centre and it is located just a few minutes away from the city centre. You will see there some beautiful modern architecture, such as the Samuel Beckett Bridge by the famous Spanish architect Santiago Calatrava, as well the Bord Gais Energy Theatre by the world-known architect Daniel Libeskind. Some interesting statues commemorating the Great Famine of the mid 19th century can be seen at the Famine Memorial on the Custom House Quay in the Dublin Docklands.

A last recommendation and one of the most visited place of Dublin is the Guinness Storehouse. It is a self-guided museum retelling the story of Dublin’s most famous drink, the Guinness beer. It introduces you to the beer’s four ingredients, the brewery’s founder Arthur Guinness and its history of advertising. The exhibition works its way upwards from the ground floor and culminates at the seventh floor Gravity Bar, where you can enjoy a beer with a great view over Dublin. As it is a very popular tourist attraction, I advise you to buy online tickets beforehand to avoid long queues.

The facade of the St.Patrick’s Cathedral 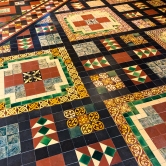 The colorful floor inside the St.Patrick’s Cathedral

An art installation at the Dublin Docklands 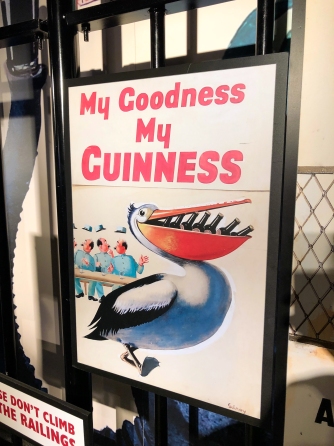 An advertising poster at the Guinness Storehouse

A building in the city centre of Dublin

Statues of the Famine Memorial in Dublin Docklands